This is mostly directed at JoAnne, but I'm happy to read input from anyone. JoAnne proabably already remembers that I own a Glmakra Standard and an Ideal. I bought the Standard new but bough the Ideal on Ebay. JoAnne sent me a lovely document, which helped me narrow down the age of my Ideal to the 80's and it seems the upper lamms have been replaced with home mada lamms. My ideal is a horizontal countermarch and almost every part of the loom is attached to texsolv via screw in eyelets. Does anyone have any idea why someone has put eyelets on all these parts of the loom? Is this how it used to be tied up? 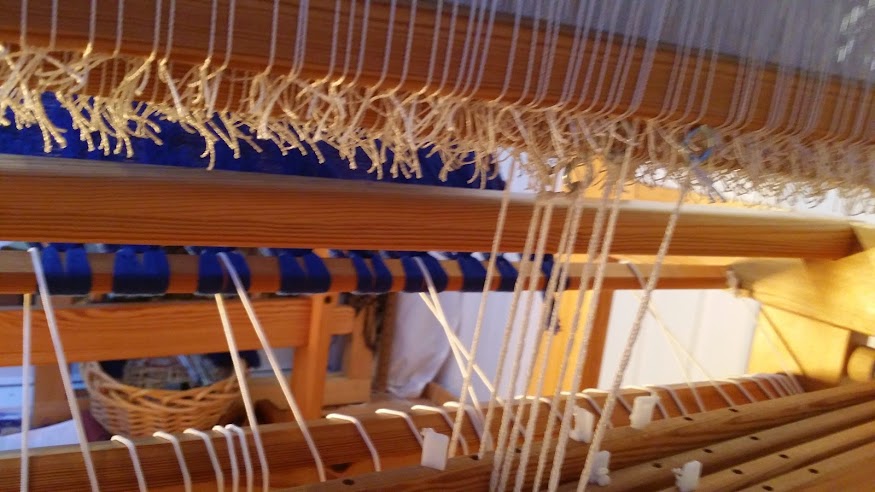 The main reason I'm asking is because I took the eyelets off the shafts and am now having some problems with shafts sometimes. It seems each time I sit down to weave I have to readjust various shafts, because they are uneven. I'm guessing this is due to the way I attached the texsolv to the shaft bars. 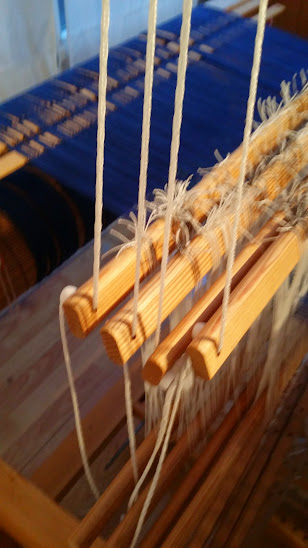 I'm now transitioning to the exact same way my Standard is tied up. 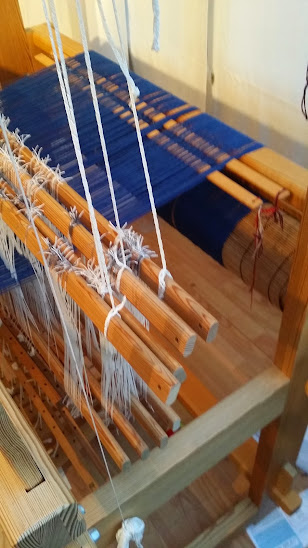 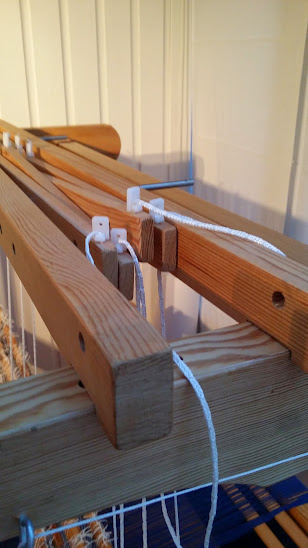 The reason I added eyelets to my shaft bars is to be able to hang them straight from the center of the bar (not tipped over like yours) without having cord on the side of the shaft, to rub against the other shafts and fray. The other way to do this is to drill a hole vertically through the bar; my shafts are much too narrow to do this.

Your loom was built at the time of transition from loom cord to Texsolv cord. I learned to weave in Germany around then and professional weavers were not sold that the cords were durable enough.

Both Glimakra and Oxaback used eyelets as connection points on the shafts, lams and other places. I see them on the Standard countermarche in my ancient Glimakra catalog and illustrations in Ulla Cyrus' "Manual of Swedish Weaving" show them on looms from both makers.

The eyelets had the loom cord running through the hole and closing with an adjustable knot or used a very small turnbuckle mounted between the eyelet and the hanging cord. The turnbuckle afforded fine tuning during a project with minimal disruption.

Over the years, the eyelets have disappeared on the Glimakra models while Oxaback uses open cup hooks in place of the eyelets (except for the lams where the ring tieup system still uses the eyelets).

You might want to consider putting cup hooks in the holes left from your eyelets.

Thank you so much for the information! It is good to know why there were eyelets on it. I'm still not sure why the eyelets were not taken out when the texsolv was put on, but at least I know why they were there in the first place!

I think I will continue to slowly remove the other eyelets and redo the texsolv properly. :)

The oldest Glimakra catalog that I have is 1972.  If you have any which are older, I would love to have a scan of it.  These old catalogs give us useful information to date the looms as well as a look into what was done before Texsolv came.

The most common place that one would consider adding screw hooks would be on the tops of the shaft bars.  The woman who makes the drawlooms in Sweden uses them on the shaft bars.  Yes, it does make it easier to move the heddles over the hook when you are weaving wider than the width between the cords coming from the countermarch. Whatever you decide to do with your loom, you will soon learn the advantages and disadvantages of your choices.

We use the hooks on the shaft bars on the Julia loom, but for a different reason.  With a loom depth of only 32 inches, we needed to have the shaft bars as close together as possible.  So, all the moving parts are thinner and the treadle holes are closer together. We use beads on the lamms as well.   Both the hooks and the beads eliminate the need for the cord to go
around the bars and lamms, which would act to separate them.  So, the bars and lamms will sit closer together. This makes the tie-up easier, since there is less difference in the lengths of the treadle cords from the back shaft to the front.

Leclerc looms have always had hooks on their shafts and screw eyes for attaching their treadle cords.  These were designed before Texsolv.  If a Glimakra loom was purchased by someone who was familiar with Leclerc tie-ups, they may have added the screw eyes or hooks.

The way tie-ups were made before Texsolv, a vertical hole was required, like the ones in the shaft holders and in the lamms and treadles.  The weaver's knot used is shown in my warping book, page 39 and also in my Tying up book.  This is very easy to do if you sometime need to tie up and you don't have the Texsolv pins.

Thank you so much for that explanation JoAnne. I'm so glad I asked this question. I feel very reassured about my decision, but it's also nice to know why someone might choose to use the other method.

I have to say, I would love to add a Julia to my collection. I think it would be a great addition to the living room, much less noise than the table loom on the rolling cart! :)