So, still getting used to the new site. Had to get help from Erica to figure out how to make a new group post! Thanks for your help. Here we are halfway through the year. Still deciding what to do with my Mighty Wolf. have a new project for the rigid heddle loom, going to put on a warp for some natural cotton towels. What is everyone else up to? Weave on everyone! Instead of starting a whole new thread I just changed the title on the one from July. I have been missing in action the past month. Life got in the way of online time, but from the lack of comments on the thread it seems I am not the only one missing. Hope everyone is okay.

Well, the Convergence conference in Reno, Nevada, is starting in just a few days. I'll try to post if I am able.

If anyone is coming, add the Weavo logo + avatar to your name badge, so I know who you are!

So I just changed the header on this thread to August. We'll see if anyone visits! I have not been online much ion the last several weeks so I am guilty of letting the thread languish. Sorry. Hope everyone is having a good summer - or winter - depending on where you live!

I'm busy preparing for our 9 day camping trip! So no weaving yet this month. I am taking my current tablet weaving project with me and have a loom warped for Taquete, which I'll be using yo teach!

Well, my editor is here and we are polishing, polishing, polishing, taking photos, polishing some more.  So - not much weaving going on, other than for the purposes of the photos.  To that end I have a short/narrow warp on the Leclerc Fanny and the (borrowed) Baby Wolf, ready for the photos tomorrow morning.  I am hoping that by the time she leaves on Wed, there will be very little left for me to do and it will be all in her hands.

On the AVL is a 30 yard long tea towel warp.  I had a bit of a 'disaster' last week when there was a loud BANG and the dobby head wasn't working properly.  Fortunately I had a back up Compu-Dobby in reserve, and it looks like it will work.  Still testing the alignment - but all work on the AVL had to stop for the editing.

I'm looking forward to getting back to the AVL next week in hopes that it will behave properly again!

Could  you tell what caused the bang?  Sounds serious.

The housing of the compu-dobby split, but I've been told that probably wasn't the cause of the noise.  So I have no idea.  :(

Editor left yesterday and I'm still trying to dig my studio out from the heaps/piles of samples we pulled out of storage for photographing.  I'm hoping to get back to the AVL tomorrow.

Today we are under a huge bank of wildfire smoke and I don't feel up to the physical effort it takes to weave on the AVL.  Instead I'm working on a new scarf prototype.

Speaking of which, I should get back to the loom!

While in Wales, I managed to finish up a meter of Finnish (aka Egyptian) Diagonals tablet weaving. I still have a lot of that warp to play with, so that will probably be my evening weaving. This week I need to get back to my damask belt, but I also need to figure out a few things that are going haywire on the site! Wish me luck!

After Reno, my travels have taken me to Utica, NY for the Kimono! The Artistry of Itchiku Kubota exhibit at the Munson Proctor Williams Art Institute; New York City (Cooper Hewitt and the MET) for Color Decoded: the Textiles of Richard Landis, and The Secret Lives of Textiles: the Milton Sonday Archives; Minneapolis, Minnesota, for stops at the Textile Center, Casket Building Arts Studios (to meet Robbie LaFleur), and the American Swedish Institute for the Gundrun Sjodén exhibition–along with seeing the collection of Scandinavian textile equipment on display.

This past weekend I was at the state fair demonstrating on a Nadeau loom, next weekend I'll be at a historic site weaving on a 1700's timber-frame loom, and the following weekend will find me in Wisconsin.

What is everyone else up to? If you aren't traveling, what are you weaving?

Photo from the warp-weighted loom workshop that was happening at the Textile Center when I visited.

Every time I tried signing on I was unable to do so even with new passwords. This morning I tried again and here I am. As I stated earlier this is going to be a learning experence.

Yesterday picked up the new yarn (8/2) for the new towel kit 4/8 shaft Cheryl is designing. Tomorrow have a weaver coming to purchase yarn and then I am going to follow her home to deliver a 48/8 Macomber loom that she purchased from me. I need to start packing my yarn van. Going to visit Cheryl's parents in Maine and will also be doing a "fiber" show there. 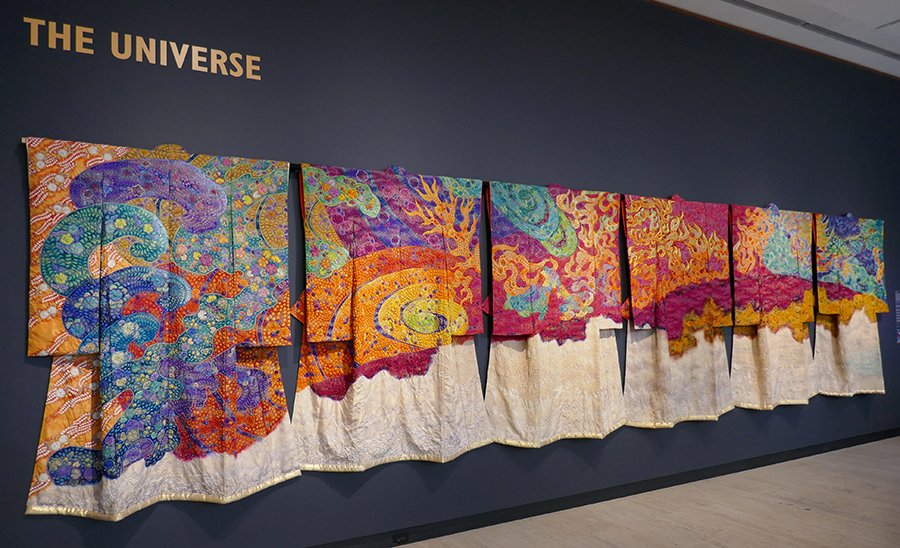 Just one of the many series of Kimonos by Itchiku Kubota at the Munson Proctor Williams Art Institute. If you go, don't miss the season series, especially "winter."

at the Cooper Hewitt, along with other terrific exhibits, including The Allure and Science of Color. I am most certainly going back for seconds on this one! 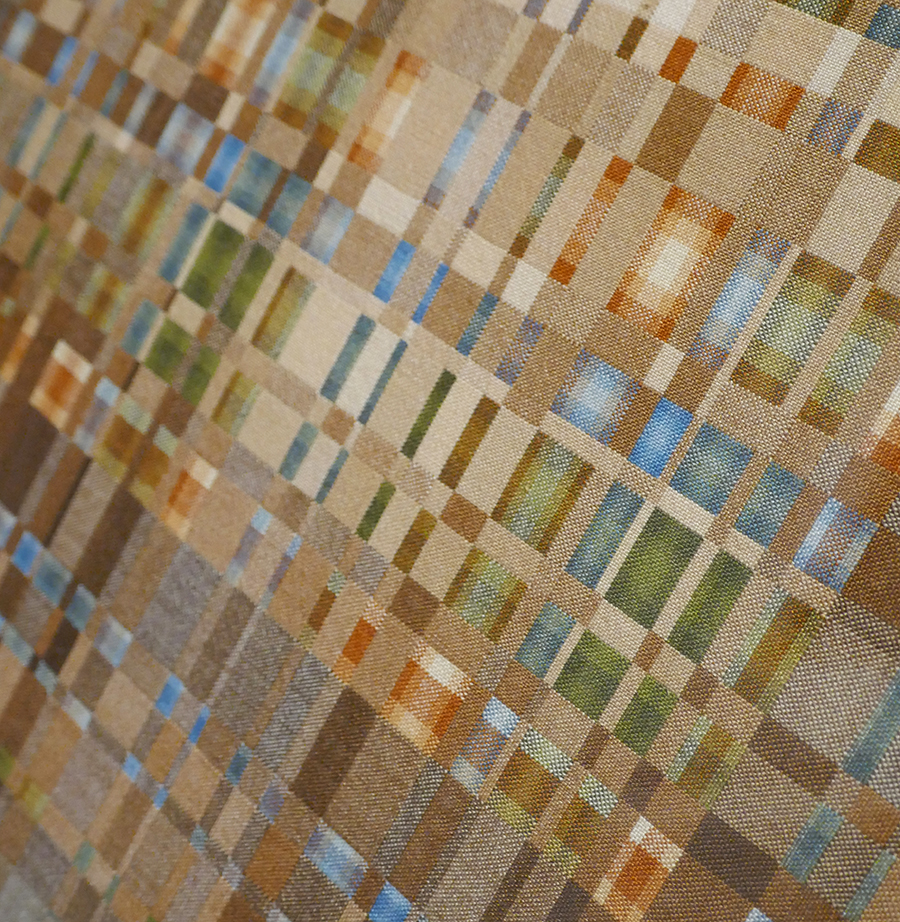 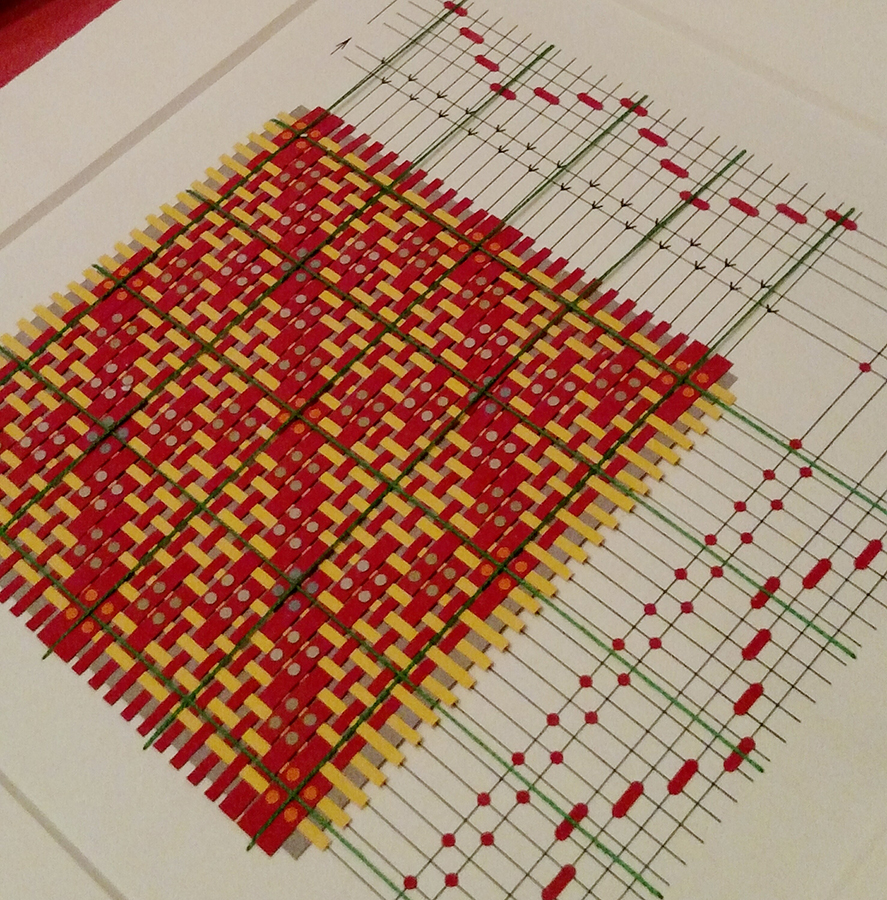 This small exhibit is at the MET, downstairs near the Watson Library. If you can't find the gallery on the MET map, ask a docent. While there, you might also want to peek in at the MET featured exhibition Heavenly Bodies, Fashion and the Catholic Imagination. 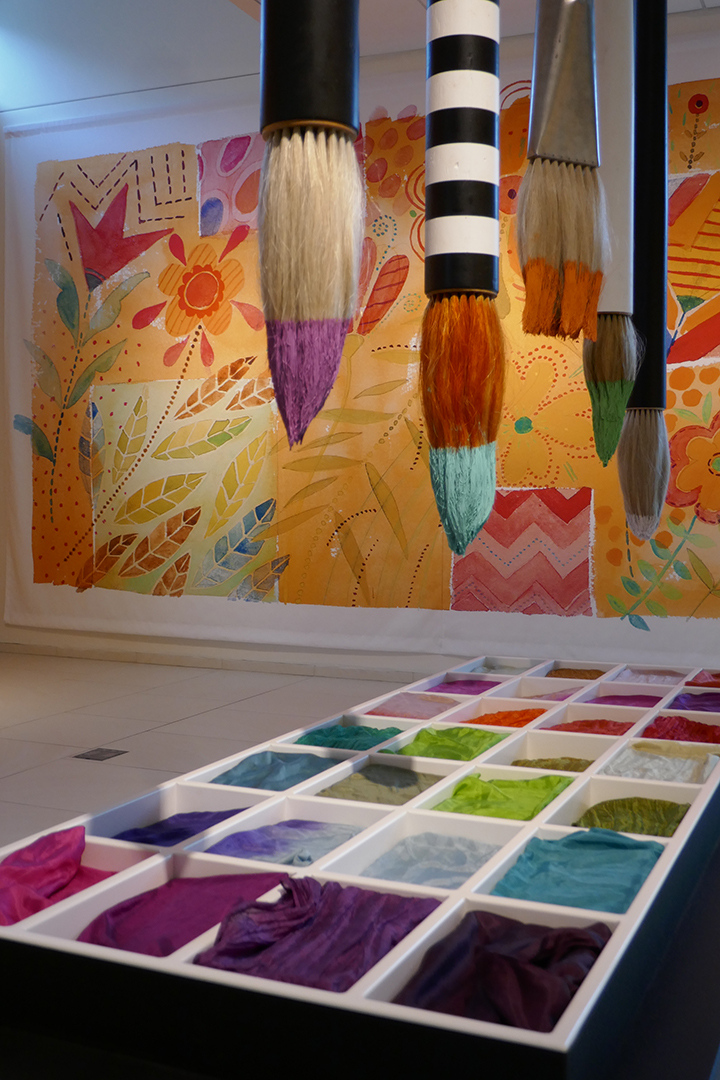 This image was from the featured exhibit of textiles and artwork by Gundrun Sjodén, but don't miss the amazing (and huge) 2-story tapestry by Helena Hernmarck. (The watercolor paint box in the foreground is filled with dyed silk.)

It takes a village.

I started planning for the new warp on this old 1950s loom back in April. I stopped by Red Stone Glen for the carpet warp to match the warp original colors, and I dug out the warping reel when the weather got warmer, planning for a very long warp so I would not have to rewarp in the near future.

But, once winding, I wound a bit more than initially planned, which meant I ran out of two of the four colors. A call to guildmates resulted in many tubes appearing (thanks everyone!) and I was able to select the best match for each color. I needed something like 200 yards at most to finish.

Because the replacement colors weren't quite a true match, it took a bit of manipulating to add these additional warps to the edge of already existing stripes, so the mismatch would be less noticed. (I am understating the problem. It took me about two hours to complete this step, when I had hoped to be threaded and beamed in that time!)

Once wound, my plan was to tie onto the existing warp and pull through. Tieing on was no problem, but when pulling through, I realized the back beam would need sticks to support the selvedges. Originally, the warps were commercially wound, and there are flanges on the back beam to keep the warp aligned. But beaming through the reed and heddles, the warp was not feeding onto the same path as the original, it was at least 1/2" or more short on each side, and the flanges were not practically adjustable. After a few turns, I knew this woudn't work. Argh! It took about 20 sticks for a 11 yard warp. And another guildmate to come over and help me beam with water bottles and sticks. (Thanks, Betty!)

Despite starting this process in April, I finished about 24 hours ahead of the 2018 state fair debut. And it weaves beautifully! 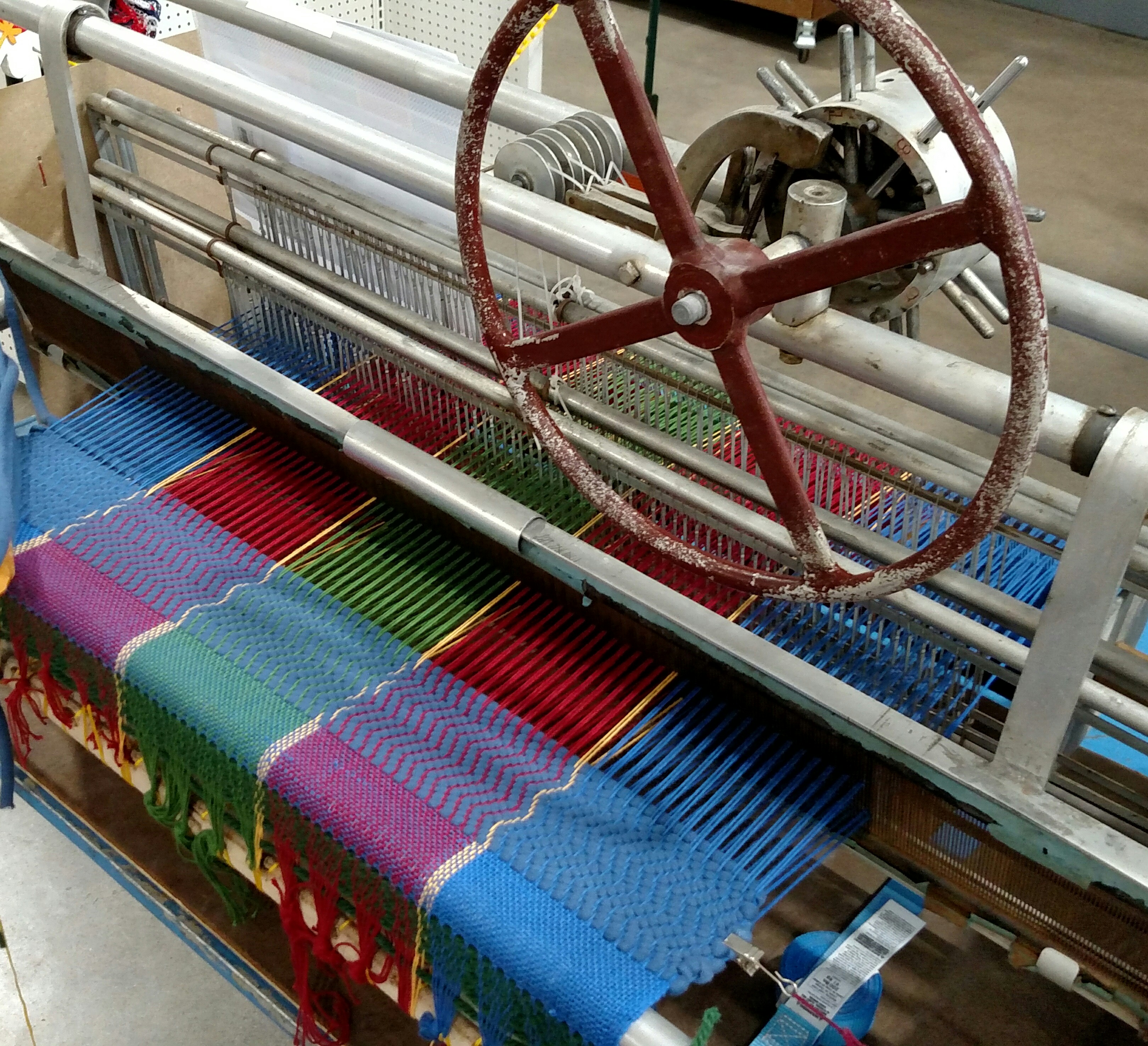 I am so glad Daily Check-In is up and running. I'm mostly a lurker but had really missed hearing/seeing what is happening with fellow weavers.

I just finished reweaving a set of gift placemats. Reweaving because the binding edge came unraveled with repeated washing---so embarrassing. The original weft was from old plaid sheets. Whatever could go wrong did and midway through the final placemat I was totally out of weft. Sat with it a couple of weeks trying to think of some workable solution short of throwing the whole project in the trash and giving up weaving. Problem solved in a near miraculous serendipity. I went to a fund raiser garage sale and a perfect match for those 20 year old sheets was available for $5. Project rewoven and done.

The second weekend of Sept. we will be in Salida, CO for the beautiful annual fiber festival.

I'm thinking of new projects, something more fun than reweaving a failure.

So glad you mentioned Salida! My husband is going to be backpacking in CO around that time, so he'll stop by. (Although not a weaver or spinner, he has attended far more years than I have. ;-)

We were there for the first time last year. Salida is one of my favorite places. The fiber festival is in the beautiful park by the river. What else do you need?It was wonderful. Many weavers, vendors, walking style show displaying handwoven clothing. A special event. 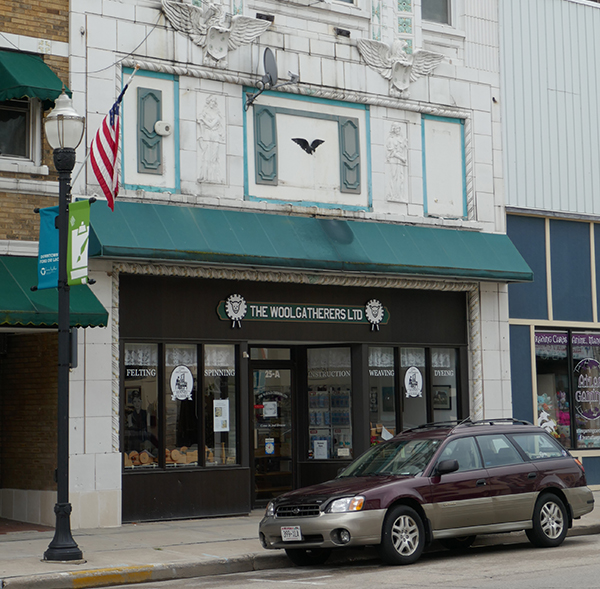 I had a terrific (but all-too-brief) visit with Sara and Hans in their store on main street last weekend. I hope you get a chance to visit, too!

You will find lots of good stuff in the front of the store, but just behind the shelves of yarn you'll find Sara's studio of multi-shaft goodness toward the back.

Unfortunately, I cannot add multiple images to a single post, as we were able to do previously. 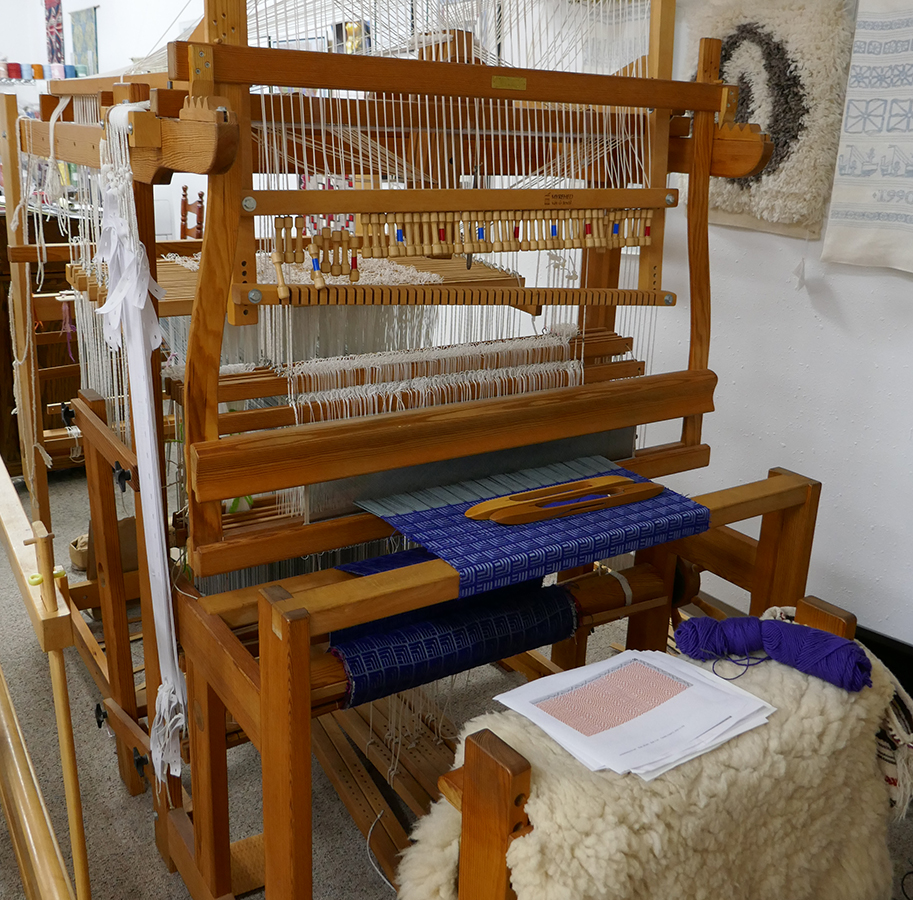 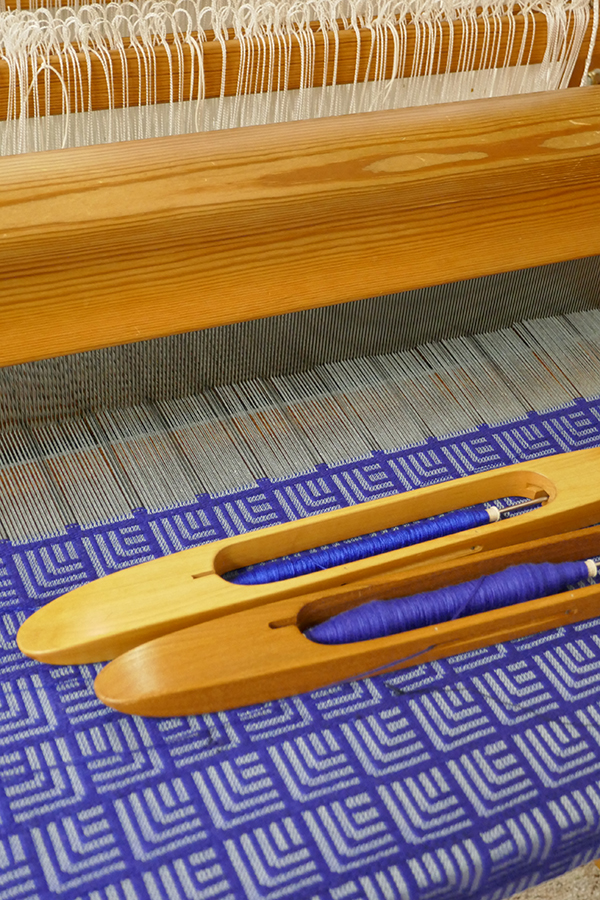 Sally, that is gorgeous on so many levels - love the color.

I loved my visit there in the spring! Was fun to finally meet them in person. Loved talking with Sara.

A week ago yesterday we were in  Salido, CO for the annual fiber festival. Salida is beautiful, the park along the river where the festival is held is beautiful, the festival was wonderful. I'm back home in Kansas in spite of hanging on to the Salida city limits sign crying because I wasn't ready to leave :-) .

Several wonderful fiber artists were there.

Held in Bedford, PA, at the National Museum of the American Coverlet, it will be their conference weekend of presentations on historic topics, along with lots of coverlets, of course!

Can hardly believe that we are more than half way through September!  I'm trying to get inventory woven for the coming craft fair season, and starting to pack for the last guild workshop I will be doing.  What's everyone else up to?

The Coverlet College was last weekend in Bedford, PA, and it was excellent, as always! I saw my second rocking beater loom, and the biggest warping board, ever. (Gee. Why not use a reel, I thought?)

The Peters Valley School of Craft juried Craft Fair is this weekend, Sept 29-30, in Augusta, New Jersey at the fairgrounds. We'll have weavers there both days.

Saturday, Oct 6, is the free "Adult Walk in & Weave" event at Hill House, Millbrook Village, Delaware Water Gap National Recreation Area. We have one spot on the loom bench left, out of 20.

I guess I have been busy preparing oodles of warps and dressing looms for demos.

After a long "timeout" I've rejoined Weavolution.  After the new website adjustments, I wasn't able to access you on my iphone, and gave up trying, but now that I have an Apple, all's well.  Can anyone tell me whether I should first pretreat the wood of my brand new Julia from Glimakra?  It's sitting in an unpacked pile smelling all wonderful as new wood does, but it appears completely untreated.  Should I oil/wax anything before I set off on this new adventure of building/learning the countermarche world?  Thanks for your help!